Outside Magazine agrees to pay $150,000 in overdue invoices


Collective action by workers yielded results this week with Outside magazine agreeing to pay more than $150,000 in late invoices owed to their vendors after receiving a demand letter from the Industrial Workers of the World Freelance Journalists Union (IWW FJU). The New Mexico-based magazine has promised to issue the payments within the next week, a significant victory in an industry where workers are often subject to one-sided and arbitrary treatment from their clients.

This development follows months of organizing by the IWW FJU. In June of 2019, the union released a survey to its members and the wider community of freelance journalists, collecting information about problems in the industry. Respondents identified Outside as one of the slowest publications when it comes to paying freelancers, and the IWW FJU followed up on this insight with dozens of conversations with contributors. Through this process, the union learned that freelancers were collectively owed over $100,000 for articles published more than 30 days prior. The IWW FJU approached Outside with this information on April 24; six days later, we received the publication’s response.

The IWW FJU will be following up with Outside contributors to ensure that they are paid within the timeframe agreed to by the publication. We hope that Outside’s commitment reflects a larger change in the publication’s payment practices moving forward. We would also like to thank everyone who helped with this campaign, especially the freelancers who shared their experiences with us, enabling this success. We encourage other freelancers facing significant delays in payment to reach out to us at [email protected].

In solidarity with Popular Front


Popular Front was created in 2018 by freelance journalist Jake Hanrahan with the mission to bring independent, grassroots conflict journalism to the world. Originally a podcast, Popular Front has evolved to include documentary videos, printed articles, news dispatches, and a community Discord to shed light on current wars and military conflicts. @PopularFrontCO takes no money from corporate sponsors and is funded by the growing community of supporters Jake has built in the past couple of years.

His work has come at a price. In September of 2015, Jake Hanrahan, Philip Pendlebury and Mohammed Rasool were arrested in Turkey for covering the YDG-H. The YDG-H is the youth wing of the Kurdistan Workers Party (PKK) and is actively fighting the Turkish military. Hanrahan and Pendlebury were released from maximum security prison after a couple of weeks, however Rasool stayed imprisoned for several months. He was eventually released in February of 2016.

Popular Front’s social media and online presence has been the target of mass reporting and brigading from supporters of authoritarian governments he’s reported on. This has resulted in Popular Front’s Youtube page being demonetized. This financial hit hinders the funding towards producing more independent conflict journalism.

The targeting did not stop there. Popular Front’s Instagram page has been shadowbanned and was removed (and re-instated) numerous times. The only way to currently find it is to type out the entire name in the search bar.


On August 13, 2019, Barstool Sports founder Dave Portnoy’s antagonistic, bosses-first mentality came to a head when journalist Rafi Letzler encouraged Barstool employees to reach out to him about the unionization process. Portnoy threatened to fire anyone who works for Barstool “on the spot” if they messaged Letzler. Portnoy continued in this vein, attempting to troll for hate-clicks while very genuinely standing in opposition to his workers’ rights. Seeking to drive home the point, a fake union Twitter account, “@BSSUNION,” was created and Barstool Sports ran an anti-unionization video titled “Professor Nate Explains Unions” the next day. 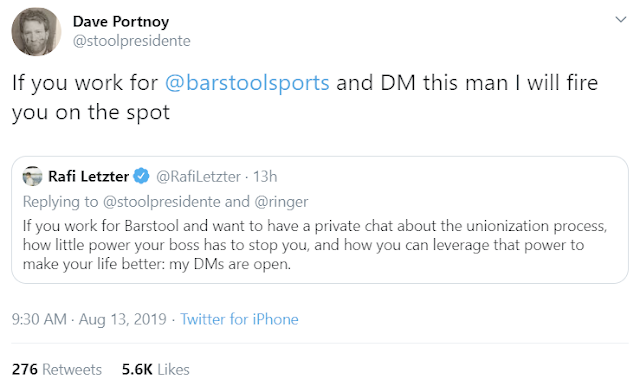 The Industrial Workers of the World Freelance Journalists Union immediately responded to Portnoy’s man-child antics by filing a formal complaint with the National Labor Relations Board. While Portnoy attempted to play his behavior off as snark, journalists, media workers, and the world saw Portnoy’s tweets as a clear indicator that Barstool Sports is a dangerous place for any worker seeking to organize.

While Portnoy has attempted to use the “it’s just a joke” defense—and will likely continue to do so in lieu of learning how to actually be funny—his behavior indicates a clear effort to establish an anti-union atmosphere at Barstool Sports at a time when media workers are increasingly finding unionization to be their only source of defense against bosses like Portnoy: bosses who are only interested in the false sense of superiority and power that comes from being massive dicks.

It is the hope of the IWW FJU that workers see the action taken by this union and know that protections against bosses like Portnoy exist. It is additionally our hope that employers and managers like Portnoy realize and learn to respect the unmitigated power of collective action. Media workers everywhere are always welcome to reach out to the IWW FJU for information about organizing.

In solidarity,
The Industrial Workers of the World Freelance Journalists Union


On November 20, freelance journalist Zachary Kamel’s Twitter account, @ZacharyKamel, was locked for a post they made back in June. The post thread identified a handful of anonymous accounts, which had been harassing journalists and activists, as being run by Michael Ber. Kamel posted images of Ber, sourced from Ber’s own Instagram and Twitter accounts.

Months later, Twitter locked Kamel’s account, citing Canadian privacy laws about publishing media of an individual. This is not only a misinterpretation of those laws, but also has a chilling effect on journalists who report on the far-right. Kamel has waited over a month for Twitter to review their appeal and the account is still suspended.

During this time, the @IWWFJU tweeted support of Kamel and brought awareness to the ongoing issue of Twitter’s imbalanced application of its Terms of Service — leaving many users vulnerable to online hate speech and threats, while punishing those who attempt to speak out against harassment. In its tweet, the FJU linked to an archive that showed the original Twitter post that @ZacharyKamel had their account locked over.

Though the archive was hosted off Twitter, Twitter suspended the @IWWFJU account, citing the same Canadian privacy laws, and required deletion of the post before reinstatement. As previously happened in Elizabeth King’s account ban ruling, Twitter is using its prior rulings to railroad certain judgements, despite new circumstances and a lack of finality on the appeals of those rulings. This is lazy enforcement and allows bad rulings to compound on an issue without any additional effort by Twitter.


On November 8, freelance journalist and Industrial Workers of the World Freelance Journalists Union (IWW FJU) member Elizabeth King’s Twitter account, @elizabcking, was suspended following coordinated mass reporting by fascists aiming to silence critical reporters. Despite not violating the platform’s terms of service, King was nevertheless informed by Twitter that the suspension was permanent.

At King’s request, the IWW FJU began tweeting in support of them from the union’s account, @IWWFJU, on November 10. These tweets, and other similar messages, were liked and shared widely in a grassroots outpouring of support from journalists, unionists, and anti-fascists.

On November 11, Twitter reversed their previous ruling on the suspension after determining for the second time that King’s account had not violated any rules.

The IWW FJU thanks all of those who spoke out in support of King. We also encourage any journalist targeted by fascists to reach out to us directly at [email protected]. We are here to support you because we wholeheartedly adhere to the IWW’s motto: “An Injury to One is an Injury to All.”